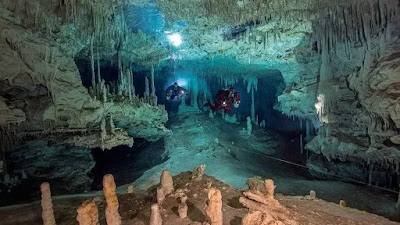 The discovery of the 347 kilometer cave system is indeed amazing. However, what they found on the cave walls is believed to help scientists solve mysteries that have been hidden for 500 years.

Oceans make up about 70 percent of planet Earth. It is estimated that only 5 percent of the oceans have been explored. It makes sense that there are still many secrets and clues about the past that we haven't discovered.

Take for example the ancient underwater city of Pavlopetri off the southern coast of Greece. A geo-archeologist discovered a 1000-year-old port city in the 1960s. They found pottery that gave a clue to how humans evolved.

In eastern Mexico, underwater archaeologists explore two interconnected underwater caves, namely Sac Actun and Dos Ojos. There, they found artifacts from ancient civilization that hinted at a mystery that we had tried to solve for centuries.

This cave houses hundreds of Mayan relics and explains how their civilization developed.

"No doubt, this is the most important submerged archeological site in the world," said Guillermo de Anda, director of the Gran Acuifero Mayan team, as reported by the Mexico Daily News .

In that discovery, you claim that they have found more than 100 archeological elements, such as the remains of extinct fauna, ancient humans, Mayan archeology, ceramics and Mayan graves.

"This discovery also makes it possible to see possible settlement patterns in the past," the man said.

This discovery has a clue to the development of a rich regional culture, before the Spanish conquest dominated the Mayan civilization.