The discovery of a 2,000-year-old beauty ring Archaeologists in Israel

» 000-year-old beauty ring, » 000-year-old beauty ring Archaeologists in Israel, » 2, » The discovery of a 2
» Senin, 16 Maret 2020
The discovery of a bronze ring with a beautiful gemstone surprised archaeologists in Israel. Experts say the ring has a unique background: the ring is thought to have fallen during a mikveh or bathing ritual about 2,000 years ago. 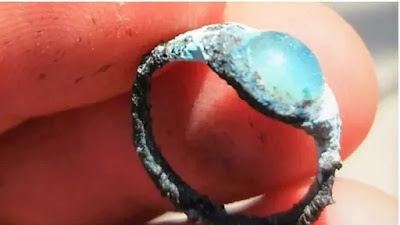 The ancient jewelery was found in a roadside ditch in David City National Park, Jerusalem. It is possible that the ring belonged to pilgrims in the past who accidentally left behind after washing themselves in a ritual.

The Times of Israel reports that ordinary past tourists will perform purification rituals before climbing the Temple Mount to visit the holy sites.

"Not much different from the present, it seems that in the past the rings and jewelry were removed before bathing," the team of archeologists from the Israeli Antiquities Authority told The Jerusalem Post.

"This ring allows us to connect personally with someone's personal story from 2,000 years ago.

In a video uploaded on Facebook City of David , archaeologist Nahshon Szanton retraces the path that pilgrims might take on the historic site. The pilgrimage route where the ring was found is also thought to have a special connection with the history of the Bible, namely the ring was built during the reign of Roman governor Pontius Pilate.

Some scholars believe that the ring belonged to Pilate who ordered the crucifixion of Jesus. However, although it cannot be known exactly when the ring was made, the theory was rejected. This is because there are opinions that say that antiques were not glamorous enough for a Roman governor.
ADS HERE !!!
Posting Lebih Baru
Posting Lama
Beranda
Langganan: Posting Komentar (Atom)