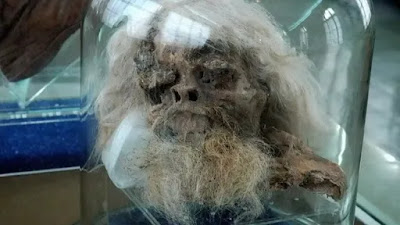 The discovery took place in a salt dome near the villages of Hamzheli, Mehrabad, and Chehrabad, in Zanjan province. The giant salt dome that extends into the surrounding rocky area consists of saline rocks, especially gypsum, clay, and rock salt. It is estimated, this settled in the Miocene period around 5-23 million years ago.

Tectonic activity and lack of soil on it have brought salt so close to the surface that it is possible to be extracted by underground miners. Not surprisingly, there are many salt mines on the southeast side of the mountain that have been operating since ancient times.

In 1994, the miners found a severed head and looked very old. Salt naturally dries and preserves the head piece. In fact, there are still gold earrings in his ears. The head has long hair, a beard and mustache.

After the discovery of a second mummy in 2004, systematic excavations began. Over the next 6 years, 4 more mummies were discovered with the total number of salt mummies being 6.

The well-preserved mummies make archaeologists and scientists happy because they can get a lot of information from them. Call it, food, their origin, or even the mining operation itself.

For example, one of the 2,200-year-old mummies is known to have tapeworm eggs in his intestines. This means, he never ate raw or undercooked meat. This became the first case of parasists in ancient Iran and was the earliest evidence of ancient intestinal parasites in the area.