» Borobudur Temple, » History of Borobudur, » Sailendra Borobudur
» Sabtu, 04 Januari 2020
Pegas-bekd.com - The Sailendra Dynasty built the largest Buddhist heritage in the world between 780-840 AD. Sailendra Dynasty was the ruling dynasty at that time. This relic was built as a place of worship of Buddha and place of pilgrimage. This place contains instructions for humans to distance themselves from the passions of the world and towards enlightenment and wisdom according to the Buddha. This relic was discovered by the British Forces in 1814 under the leadership of Sir Thomas Stanford Raffles. The temple area was completely cleaned up in 1835. 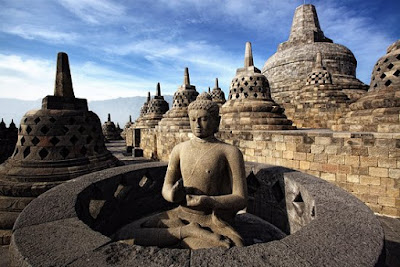 Borobudur was built in the style of the Mandala which reflects the universe in Buddhist beliefs. The structure of the building is box-shaped with four entrances and a circular center point. When viewed from the outside to the inside is divided into two parts, namely the natural world which is divided into three zones on the outside, and the Nirvana realm at the center.
Zone 1: Three times
natural world which is seen and is being experienced by humans now.
Kamadhatu consists of 160 reliefs describing the Karmawibhangga Sutra, the law of cause and effect. Describes human nature and passions, such as robbing, killing, raping, torturing, and slander.
The cover at the bottom has been permanently opened so that visitors can see the hidden relief at the bottom. An entire photo collection of 160 relief photos can be seen at the Borobudur Temple Museum located in Borobudur Archaeological Park.
Zona 2: Rupadhatu
the transitional world, where humanity has been freed from the affairs of the world.
Rapadhatu consists of a gallery of stone relief carvings and a statue of a Buddha. In total there are 328 Buddhist statues that also have relief decoration on its carvings.
According to the Sanskrit manuscripts in this section consists of 1300 reliefs in the form of Gandhawyuha, Lalitawistara, Jataka and Awadana. Altogether stretches as far as 2.5 km with 1212 panels.
Zona 3: Arupadhatu
the highest realm, the house of God.
Three circular porches lead to the dome at the center or stupa which depicts the rise of the world. In this section there is no ornamentation or decoration, which means that it represents the highest purity.
The porch in this section consists of a circular stupa with a hollow, inverted bell, containing a statue of Buddha that leads to the outside of the temple. There are 72 stupas in total. The largest stupa in the middle is not as high as the original version which has a height of 42m above the ground with a diameter of 9.9m. Unlike the stupas that surround it, the central stupas are empty and cause debate that there are actually contents but there are also those who argue that the stupas are indeed empty.
Relief
In total there are 504 Buddhas with meditation attitudes and six different hand positions throughout the temple.
Temple Corridor
During the restoration of the early 20th century, two smaller temples were found around Borobudur, namely Pawon Temple and Mendut Temple in line with Borobudur Temple. Pawon Temple is 1.15 km from Borobudur, while Mendut Temple is 3 km from Borobudur Temple. There is a belief that there is a religious connection between the three temples but the ritual process is still unknown.
The three temples form the route for the Vesak Day Festival which is held every year during the full moon in April or May. The festival commemorates the birth and death, and enlightenment given by Buddha Gautama.
ADS HERE !!!
Posting Lebih Baru
Beranda
Langganan: Posting Komentar (Atom)